Overheard in a queue: ‘These teachings are making me want to read and study the books more’. Everywhere you look you see people studying, reading, even memorising some of the key passages which Gen-la Dekyong says Geshe-la has encouraged us to memorise. In the book Oral Instructions it says often ‘recite mentally in your heart’. It is through internalising the teachings that we will be able to then absorb deeply into them in meditation, especially in our upcoming two day retreat. 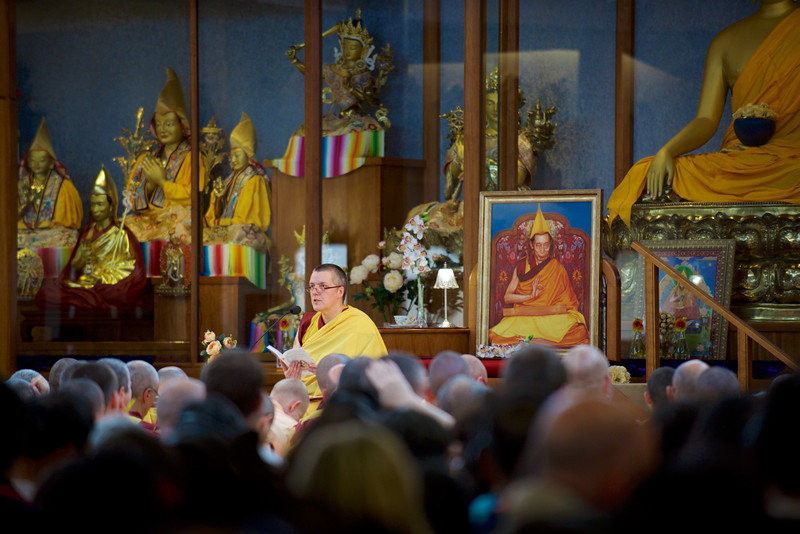 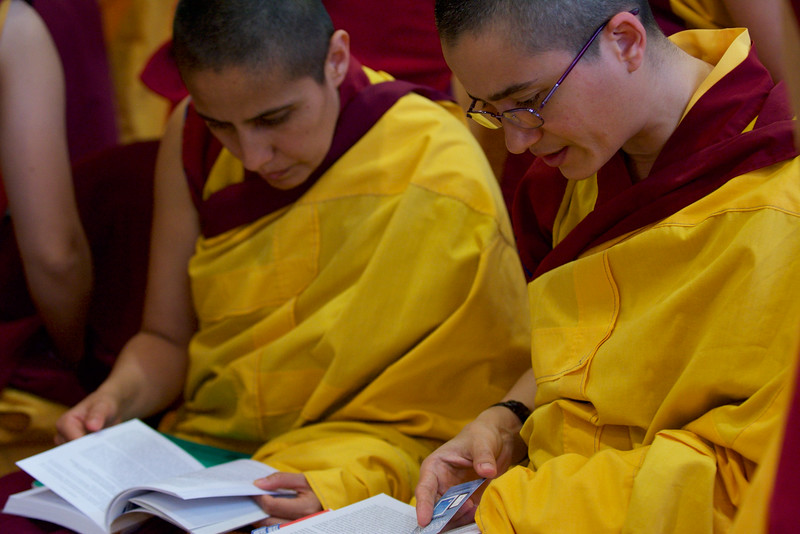 The teachings today focused on the three completion stage meditations of the central channel, the drop and the wind. Gen-la Dekyong mainly gave us the transmission directly from the book. At one point she gave us a long passage from Venerable Geshe-la’s London teachings (the oral instructions of the Oral Instructions, as she called them) containing wonderful words of encouragement. ‘The view of Highest Yoga Tantra is unbelievable. It’s the real truth. It’s not intellectual. It’s so practical and so wonderful. Initially it may seem that these practices (eg. envisioning yourself as a Buddha, training in absorbing your inner winds into your central channel) are a silly idea. If things existed inherently then that would be correct. But there is no thing existing from its own side. Everything in reality is imagination. Correct imagination is the life of Highest Yoga Tantra.’

Gen-la Dekyong said that Geshe-la has said that if you can’t imagine yourself becoming a Buddha then you will never become them. With each new practice that she introduced she encouraged us to imagine being able to do it (eg. absorb our inner winds, develop an illusory body). As Geshe-la has said: Everything begins in the imagination.

Tomorrow we have the opportunity to take these ‘unbelievable’ Highest Yoga Tantra teachings to heart in retreat. Geshe-la said we should think: ‘How wonderful if other people throughout the world have the opportunity to gain this kind of knowledge.’ Of course, that depends on us gaining true experience of this special knowledge. Imagine that! And tomorrow we begin to make it happen.